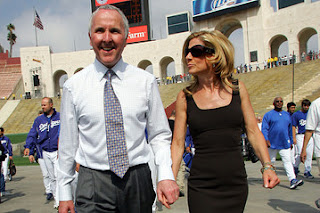 If everyone hates a person, and they didn't commit a heinous act against humanity, I usually have to get on that guy's team.   Baseball provides a lot of guys like that.  Barry Bonds, Jose Conseco, and lately it’s been Frank McCourt.
I like me some Frank McCourt.
Frank McCourt’s rocky reign is over but he did some cool things as owner of the Dodgers.
The coolest thing was a preseason game in the L.A. Coliseum.  That’s where the Dodger’s played when they first moved out west so it was amazing to get a chance to experience a baseball game in that stadium.
Another cool thing is for the last 3 years Mr. McCourt has made Bud Selig life a living hell.
Full disclosure, Frank McCourt is actually a very close friend of mine.  I’ve never met the man, but the enemy of my enemy is my friend.
Posted by T. Sean Shannon at 2:45 PM