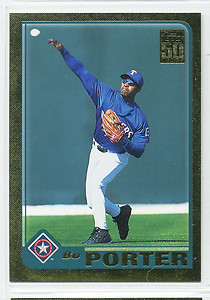 I dug around my cards last night and found a Bo Porter card.   This is from 2001 and he was playing with the Texas Rangers.

The more I learn about Bo Porter, the more excited I am about him managing the Houston Astros.  He's 40 which is youngish for a manager, but he's got a ton of rookies on his squad so to them he must seem like an old man.  Even if it doesn't work out in Houston, he'll learn a ton about being a manager which will help him down the road.

Bo Porter hit 2 home runs during his major league career.  One was off Mark Mulder, the other Tony Fiore.

Bo Porter was named after the character Bo from the Dukes of Hazard.  His parents were being ironic.   He also has a brother named Luke and a sister named Boss Hog.

Bo Porter was a 2-sport athlete for the University of Iowa Hawkeyes, who's mascot is Herky the Hawk. 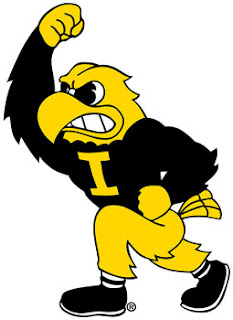 Bo Porter played in the majors for 3 teams.  The A's, Rangers, Cubs.

Bo Porter was the Vice President of his high school student council and when President Debbie Lassen had an operation to get her tonsils out, Bo was sworn in while she was under anesthesia.

Bo Porter earned All-Big 10 honors in both baseball and football as senior and was named defensive MVP of football team as senior.


I declare today Bo Porter day!!!  Go out there and go one more mile today.  For Bo Porter.

Astros name a new Manager. Who is Bo Porter?