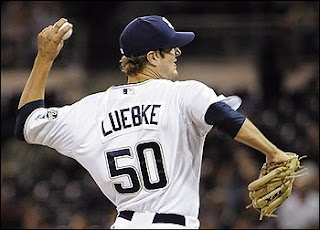 Hello friends.  Here’s some more advice to help you build the best Fantasy Baseball Team.
SLEEPER
Cory Luebke – San Diego Padres Starting Pitcher
He has a hard last name to pronounce and he plays for San Diego, that’s about as under the radar as you can get.  A late round pick that can get you some strikeouts and Cory should have a low ERA thanks to pitcher friendly Petco Park.
RISKY MOVE
Josh Hamilton – Texas Ranger Outfielder
An amazing player and I chose him first round last year but this season that could be a big mistake.  I have it on good authority from a guy in the commissioner’s office that after the All-Star break, MLB is going to ban any player who has tattoos on his forearms.  That should also scare you away from Diamondback’s Ryan Roberts.   I know some of you are thinking, “What about Prince Fielder?”  The rule doesn’t apply to black guys because their tattoos blend in better because of their skin tone.
Posted by T. Sean Shannon at 11:06 AM