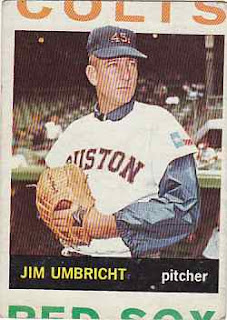 My buddy Frank gave me this Jim Umbricht card and there are many reasons to love it.
First, it’s the Houston Colt .45’s  and Jim is rockin’ a windbreaker under his jersey.
Second, you can see the Texas flag on his sleeve.  Who doesn’t love Texas?
Third, No it’s not Topps first TRADED series, it’s a miss-cut.  You can see the card below it on the sheet, belonging to Red Sox 1st baseman Dick Stuart, nicknamed Dr. Strange-glove, because of poor fielding ability.
But the best reason to love this card is Jim Umbricht’s fun fact on the back of his card. 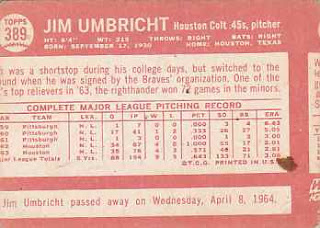 That’s pretty heavy to lay on a little kid.  Imagine you’re 8 years old and hoping to get a Mickey Mantle card and you find out that everyone dies..  This is supposed to be a fun hobby and now you’re forced to deal with mortality.
Jim was diagnosed with a melanoma in his leg before the 63 season, but still managed to pitch the entire season.   In the off season his health deteriorated and he passed away at the age of 33.
2 cool things that happened to Jim after his death; the Astros retired his jersey number (32) and they spread his ashes at the construction site of the Astrodome.
Have a good weekend.