Baseball has it's 3rd Opening Day of the 2012 Season, just one more to go 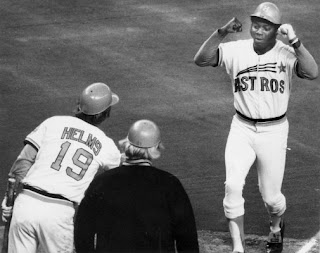 Today I got up to watch day 3 of opening day.  2 of the best fire-ballers in baseball face off.
Verlander vs Beckett Lester?  Still a good game to watch, but I wanted to see heat.  Never heard why Josh Beckett didn't pitch.

Under the category of I don't want to be a hater...
Last Nights Opening Day for Major League Baseball

Last nights first pitch with Muhammad Ali was awkward and I felt bad for the guy and how he was presented.  Could they drive the cart any slower?  And then the PA announcer trying to get the ALI chant going.  That was a train wreck.

I know it's a new ballpark so that explains the below par camera work.  But this is the big opening night.  There was a close pick off play and they never re-showed it.

Did ESPN really need to jet Orel and the gang from Miami to call the game today.  I miss Jon Miller and Joe Morgan.  I still don't understand why people violently disliked Joe Morgan.  Still don't know why we traded him for Tommy Helms. (pictured above)

Why does ESPN let people gather behind their announcer and chant and scream during the pregame and rap up show?  Has that ever worked or helped a show?  I don't want to see drunk people screaming in the background ever, but especially when people are talking.  It doesn't help the announcers or the viewing audience at home, but it seems standard practice for ESPN shows.  It's everything horrible about going to the stadium brought into my home.  Thank you?


And so tomorrow, Friday April 6th, is the REAL OFFICIAL OPENING DAY FOR BASEBALL because that's when the Astros play their first game.  We're only a half-game back of the Cardinals.
Posted by T. Sean Shannon at 5:01 PM