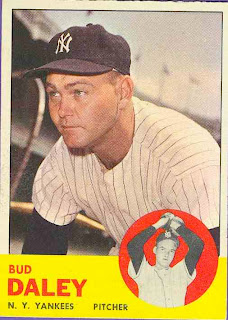 In honor of 4-20, we take a look at not only a man, but also the mantra of “The Dude”, yes it’s Bud Daley.  It’s his 1963 card, which is one of my favorite years.
Other than having one of the greatest names in baseball, Bud Daley was a knuckle ball pitcher, two-time all-star and got a World Series ring in 1961 with the New York Yankees.
In the sixties I don’t think marijuana was referred to as ‘bud’, but Budweiser was the most popular beer at the time, which means this guy’s name has meant  “party daily” his entire life.
God bless Bud Daley.  Bubbling sound… exhale…  cough.
http://youtu.be/iAni_kr3XU0
I did a baseball card theater last year for the 4-20 team.  If you haven't seen it you should check it out.   Johnny Bench, Eric Gagne, and Bake McBride all made the team.