Jack Ass on the Baseball Diamond 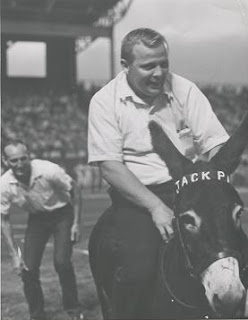 Opening day at Dodger Stadium was amazing.  It's the 50th anniversary of Dodger Stadium so Maury Wills and others from the 62 Dodgers where there.  Dodgers won 2-1 thanks to an 8th inning homer by Andre Either.

In Baltimore on opening day a jack ass wearing a Batman mask, cape and underwear ran on to the field.  I'm not big on people running onto the field but this guy did it with style.  If you watch the video and want to fast forward, the cops tackle him around the 1 minute mark.  I don't like that it encourages other people to run on the field but this guy made me laugh and he pays for it too, which is of course the best part.

He's been banned for life from Camden Yards.  I'm pretty sure if he comes dressed as Bruce Wayne, no one will recognize him.

The best fan running on the field I've ever seen was a guy in Minute Maid Park last year.  Again, he did it with style.