Tip of the Hat to Chipper Jones 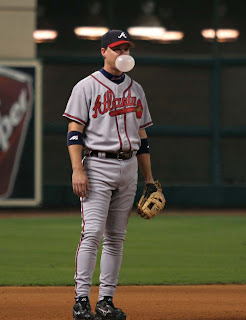 The 2012 victory lap for Chipper Jones has begun.  Mr. Jones is retiring at the end of the season and today he's making his last regular season appearance at Dodger Stadium.   Yesterday on his 40th birthday he went deep against the Dodgers.  What a cool way to celebrate your birthday.

I dig victory laps.  I was in Shea Stadium when Craig Biggio had his last at bat there and all the fans gave him a nice ovation.

I was at Dodger Stadium when Bobby Cox coached his last game there and he got a big ovation.

Chipper Jones is old school, playing for the same team his entire career and putting up solid numbers the entire time.  Mr. Jones and the Atlanta Braves were a thorn in the Astros side for the entire 90's.

I'm bummed I won't be there today for his Dodger Stadium send off because Mr. Jones has been a treat to watch for the last 19 years.