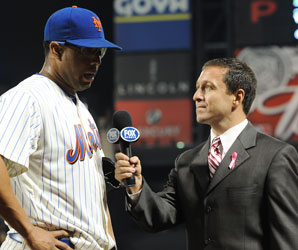 “I respect Fidel Castro. You know why? A lot of people have wanted to kill Fidel Castro for the last 60 years, but that [expletive] is still here.”
Ozzie Guillen.
The most interesting about this statement to me is what’s the expletive?  Did he call him an asshole?  Dickhead?  Douche bag?  M'fer?

The media needs controversy and the easiest way to create it is to ignore what someone meant and focus on all the negative that can be sucked from it’s marrow.

Ken Rosenthal says Ozzie should be suspended for his comments.  That’s the great thing about writing you can give your opinion on what should happen.  Here’s what I think should happen.

I think Ken Rosenthal should be physically intimidated for his article.  If you see him in an elevator, anyone over 5’5 should glare down at him silently, then slowly back him into a corner.
If you see Ken in the commissary, I think you should wait till he sits at your table and then everyone should get up and move to a different table.
If you see him in the parking garage I think you should yell “There’s the squirrel.”  Then start walking towards him in a threaten manner and make him run to his car.
Ken Rosenthal missed out on character-building beatings as a child and I think anyone with a time machine should go back in time and give little Kenny a nice ass whipping.
As for Guillen's statement.  It's Ozzie.  I know what he meant.