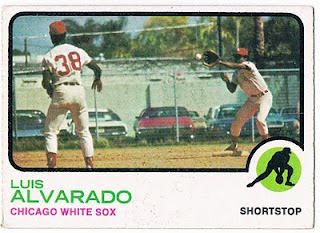 In celebration of El cuatro de Mayo I present Luis Alvarado in one of the worse yet compelling baseball cards I own.
First, his back is to the camera so I guess I’ll take Topp’s word that it’s Mr. Alvarado.
Second, look how big his number is on his back, that’s a spring training uniform.
Lastly, is Mr. Alvarado playing in a city park?   What’s with all the cars in the background?  The red one looks like a Chevy Impala.  There’s a freeway in the background. I’m pretty sure I played some American Legion games at that field.  It’s right off the Gulf Freeway,

Imagine you’re lucky enough to get to be on a baseball card and your mom and son asks to see it and you show them this card.
Who’s that guy in the card with you, with his face towards the camera?
That’s Hank Allen.
The home run king?
No.  That’s Hank Aaron.
Why is he facing the camera and you aren’t?   Is that even you, Dad?
Yes.
Is that the Gulf Freeway?  I think Shirley’s boy plays American Legion ball there.  You need to stand up straight.  You’re slouching in that photo.
Dad when I grow up…
Yes, son.
Can I have a red impala?
Posted by T. Sean Shannon at 9:33 AM