Where have you gone Albert Pujols? 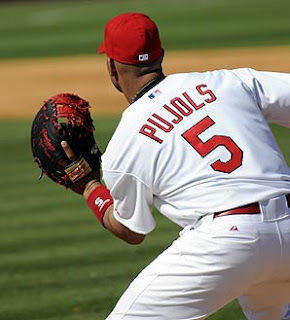 They're are many reasons given for his slump.  Trouble adjusting to American League pitching, pressure to live up to his contract, his wife's been busting his balls at home...  the list goes on and on.

Attention all major league pitchers:  This is just the eye of the storm.  Do not come out of your house.  The nightmare that is Albert Pujols is not over.   Once he gets back on track, it's going to be even worse, because now he's all mad.

My theory is that he was distraught that he didn't get to beat up on the Astros this season.  Even if he slumps all season, no worries, next year when the Astros are bullied to the American League he will face them 18 times and get back in the rhythm of abusing opponents.

I still say he finishes this year with 35 home runs.