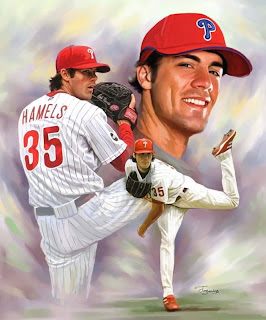 As you remember last time...

Cole Hamels drilled Bryce Harper in the back to take the cocky rookie down a peg.  Then Mr. Harper stole home off Mr. Hamels.

Last night, they faced each other for the first time since the beaning.

After the game Bryce Harper was asked about Cole Hamels performance.


"He was really good.  He had every pitch working for him.  Fast ball, curve ball, change up, cutter, you name it.  He threw the ball really well tonight.  Painted it up.  All the effort he gave.  He did a great job."

Plus, it's the gift that keeps giving.  A few years from now, Bryce Harper is going to slide hard into 2nd and take-out some cocky rookie SS.  Hot damn I love baseball.
Posted by T. Sean Shannon at 9:12 AM