The Astros came to town to face the Dodgers and I was lucky enough to go Friday night and watch Lucas Harrell pitch a gem and beat Clayton Kershaw 3-1.
Sadly, I also went to Saturday nights game which ended with Dodgers’ catcher , A.J. Ellis hitting a 3-run walk off home run to beat the Astros 6-3.  It was horrible.  Not because of the walk-off home run, but because the game took 4 hours.  Walk off homers are exciting but I think everyone in the stadium cheered because we weren't going into extra innings.  4 hours?  Springsteen concerts don't last that long and they have an intermission.
The official time of the game was 3 hours and 50 minutes.  I don’t know who’s tinkering with the numbers but the game started at 7:10 and didn’t end till 11:30.
It was ponderous.   The game moved with the tempo of a big fat woman behind the counter at the Post Office.  Both pitchers enter the 4th inning having thrown 90 pitches.
I love baseball.  I love the Astros.  I dig the Dodgers.  I had great seats.  But I don’t want to do anything for 4 hours.  Nothing.  Think all you want, I don’t want it.
How about sleep?  Nope.  4 hours is too long for a nap and not long enough for sleeping.
What about hanging out with Bob Dylan?  Yeah, but 4 hours straight?  And if it turns out anything like Saturday’s game, Mr. Dylan would only give one-word answers for 4 hours.  No, thank you.
The game lasted so long it felt like I was watching a play.
That’s the thing I miss most about Roy Oswalt playing for the Astros.  Not only is he an amazing pitcher, but Country Roy would get you out of there in under 2 hours. 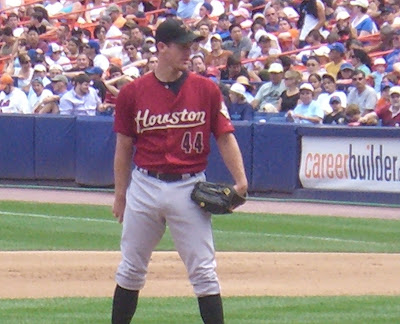 I just read that Mr. Oswalt signed with Texas.  Would love to see the Rangers finally put it together and Roy get a ring.  One things for sure, Josh Hamilton, Nelson Cruz and those other guys are going to love that Mr. Oswalt won’t leave them baking in the Texas sun for 4 hours.
4 hours.  Man.  I was there.
Posted by T. Sean Shannon at 8:31 AM