Mickey Hatcher with a big glove.  It's funny because it's BIG. 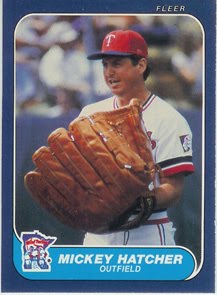 Mickey Hatcher, the Hitting Coach for the Los Angeles Angels of Anaheim, (that's a stupid name, I can't believe they're going with that) was relieved of his position by the General Manager.

I don't think anyone believes Mickey Hatcher is the problem but someone had to go.

But now there's a weird funk left by the move.

So that put Mr. Hatcher in the crosshairs.  Then the General Manager pulls rank on manager Mike Scioscia and fires the hitting coach

Imagine your boss in the front office fires your employee who is also your buddy.  He doesn't even know what your buddy does, plus you get de-balled in front of your employees.

There's got to be a crappy vibe around Angels Stadium of Anaheim.  (that's a stupid name for a stadium too)

Then the day after your buddy gets fired, Albert Pujols and Veron Wells hit homers.  So you know the GM thinks he's brilliant.

Then the new hitting coach comes in.  Finally, a guy who can relate to the black and Latino players.  It's an even older white guy. 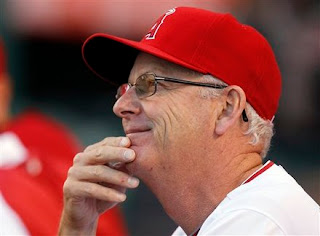 
On a side note.  I hate the Mickey Hatcher Big Glove baseball card.  I hate when they try to be funny, then it's not funny.  It's like that news guy, Brian Williams.  He was kind of funny until he started thinking he was funny.   Dude, your news guy funny.   Take it down a notch.