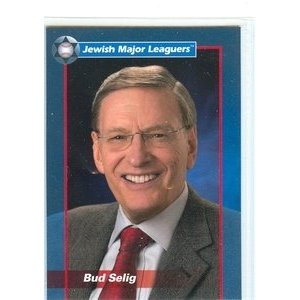 This is from a set that Topps did in 2010 featuring all the Jewish major leaguers.  I wish they would do a cards for all the different Latino players so I could figure out which guy was from which island but I guess I'll have to wait for the All-World Baseball Classic to find that out.

But back to today's card featuring Bud Selig.  He introduced Wild Cards to the playoffs, interleague play and railroaded the Astros into the American League.

I'm pissed about my team being forced into the American League but I worry I project myself as some type of baseball nut-job.  I love baseball, the Astros are my team and I’ve never been a big fan of the DH rule, but at the end of the day it’s just entertainment.  A game.  That's all.  I’ve lived 47 years and all the things I’ve experienced, like the death of my brother and the birth of my daughter, has helped me gain perspective on what matters most in life.
That said, I hope Bud Selig gets raped by a monkey with AIDS.
Here’s how you do it.  First get a monkey with AIDS.  It's definitely a buyers market.  I would think people would want to get rid of them.  Then we get Bud’s travel itinerary and rent the hotel room across from him.
We’ll sneak the monkey in the room, strap him to a chair and show him National Geographic films of monkey’s having sex.   We tie his hands so he can’t relieve himself.  (Note: The monkey should be dosed with Viagra and Ritalin.  We want him aroused and focused. )
My brother, wearing a fake moustache, waits in the lobby for Mr. Selig.  He’ll ride up the elevator and once outside the room, Pat socks Bud in the gut, drags him into the room.
Pat throws Bud down on the floor and douses him with a bottle of ape pheromones.  Pat then joins me in the safety of a shark cage as I release the monkey. Then we laugh and watch the monkey go to brown-town on the guy who forced the Astros into the American League.  We’ll film the whole thing and show it opening day 2013 at Minute Maid Field.
But that probably won’t happen.  Bummer.   But if Bud Selig did get raped by a monkey with AIDS I would say that book The Secret really works.