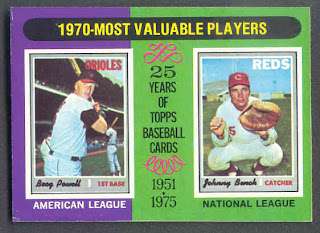 BASEBALL CARD FRIDAY: 1970 - Most Valuable Player
In 1975 Topps celebrating 25 years put out cards with MVP from each year and this card features two of my favorite players.  Boog Powell and Johnny Bench. 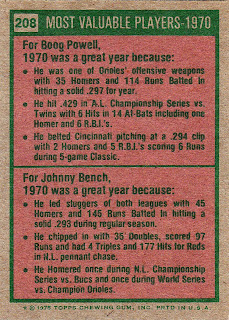 I loved that they featured 25 years of MVP's and 1968 is the other year I dig because it features 2 pitchers.  Bob Gibson and Denny McClaine.  A jail-bird and a bad ass. 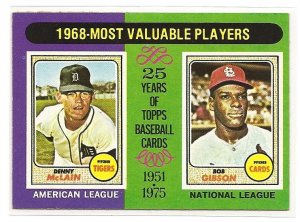 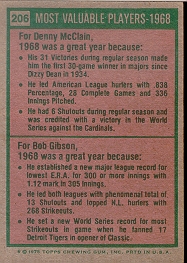 These guys were so great they lowered the mound the next year.

WHAT ABOUT THIS YEARS MVP?

AMERICAN LEAGUE MVP
In the American League I think you have to give it to Mike Trout.  He's made such an impact with his offense as well as his glove and the guy didn't even start the season in the majors.

NATIONAL LEAGUE MVP
In the National League some people are talking Ryan Braun if the Brewers make it or Andrew McCutchen if the Pirates make it.  Buster Posey is another name being mentioned.  All those people are wrong.  The N.L. MVP winner is Mike Trout.  He's that good.  I don't know if I mentioned it but he didn't even start the season in the majors.