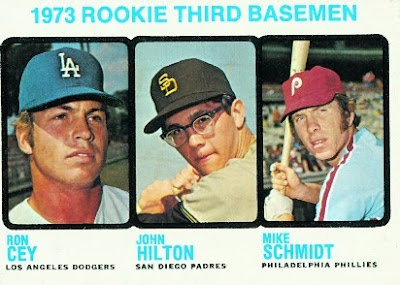 The rookies on this card went on to hit 870 home runs and make 18 All-Star games, which might be a record for rookie cards, I'm not that much of a nerd to know if it is but it's an impressive stat.

RON CEY
Ron Cey or the Penguin was part of the legendary Dodger All-Star infield with Garvey, Lopes and Russell, and played the last half of his career as a Cub.  He was co-MVP of the 1981 World Series helping the Dodgers beat New York.


MIKE SCHMIDT
Mike Schmidt went on to become one of the greatest third basemen in the game.  Anytime I went to an Astros-Phillies game growing up, that guy hit a home run.  He was an Astros killer.  I looked it up once and of his over 548 homerun I'm pretty sure it said 479 of them were against the Astros.  (It might have been 497, I might be mixing those two numbers up.)  Mike Schmidt was elected to the Baseball Hall of Fame in 1995.  Here are just a few of his accomplishments.

JOHN HILTON
Most people would crumble under the pressure of being on a card with 2 of the best third basemen of that era, but not John Hilton.  Not him.  You can't break him.  What did he do?

He changed his name to Dave and moved to second base. 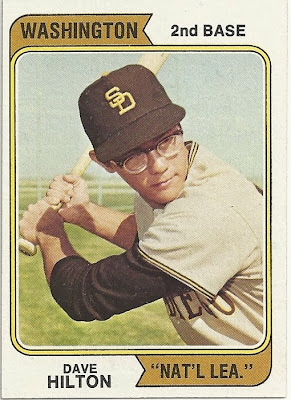 Also he tried to move to a different city, Washington D.C. but the league nixed that, so this card turned out to be a misprint.

John Dave Hilton is from Texas and went to Rice and played in the big leagues for 4 years.
So that's 4 more years than I played so I think Mr. Hilton is super kick ass.   Plus he got to be on a card with Cey and Schmidt.  How cool is that?  And he's a Texan.

Have a great John Dave Hilton day as well as a good weekend.

I have to go finish an outline.