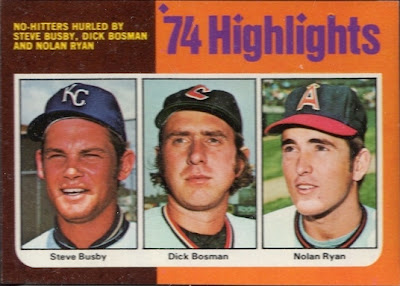 There's a zeitgeist about no-hitters so today I feature a card from 1975 about 3 guys from 1974 who pitched a no-no.

The back of the card gives you all the info. 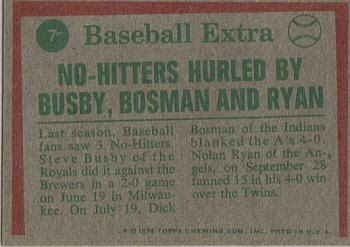 Nolan Ryan you know.  He is the greatest pitcher of all time.  He threw 7 no-hitters, struck out 5,714 and beat up Robin Ventura. 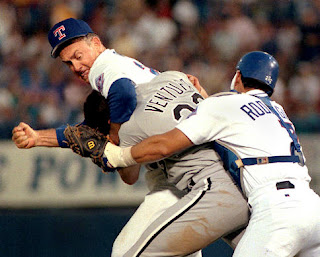 Mr. Busby pitched for Kansas City, threw 2 no hitters, made a couple of All Star teams but his career was cut short because of injury.  I don't remember that much about him because I lived in a national league city and he was in the A.L.  Back then, the specialty items, like baseball coins, 3-d cards, etc would usually feature one guy from each team and from that time period it was either Amos Ottis or Lou Pinnela. 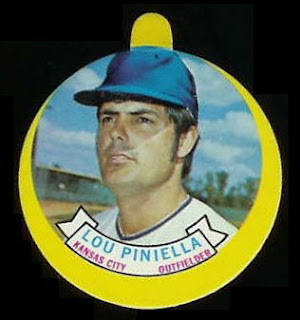 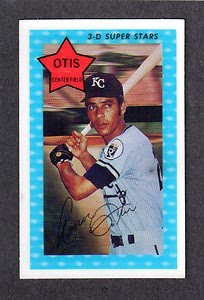 One interesting fact about Steve Busby:  After returning from an arm injury his doctors put Mr. Busby on a pitch count, making him the first player to start that crap.  Even though I wasn't around, I like the old days when two starting pitchers would throw 9 innings or more if it went into extras.

I remember Dick Bosman because he was the one player featured on the Washington Senators.  It was either him or Frank Howard.  Mr. Bosman threw his no-hitter against the defending World Champion A's and would have had a perfect game but someone made an error in the 4th inning.  That someone; Dick Bosman. 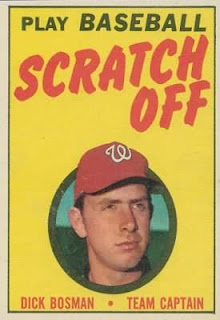 I declare today Steve Busby, Dick Bosman and Nolan Ryan day.
Also, I just got the '74 Highlight card a couple months ago from Tom Brunelle, a cool guy who saw baseball card theater and gave me a big storage box of his old cards.
So today is Tom Brunelle Day too.   So live it up.
Have a good weekend.  I'm taking Maggie to her first Dodger game tonight.  I hope she doesn't get drunk.
Posted by T. Sean Shannon at 12:31 PM