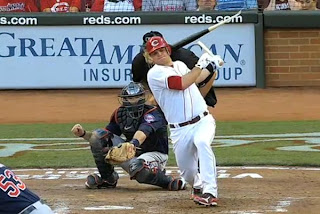 Last week during a game in Cincinnati, Umpire Jerry Layne was struck in the head with a broken bat.  The fat part of the bat knocked Mr. Layne in the left side of the head.  He was taken to the hospital and checked for a concussion.

I know the answer isn't aluminum bats, but somebody better figure out something before a player, umpire or fan is killed or maimed for life.  Please solve the problem before Congress gets involved.

For my part I've made a hard hitting documentary about the danger of maple baseball bats.  Okay, maybe it's not so much a documentary as a new episode of Baseball Card Theater.


Have a great Tuesday.  Count your blessings.