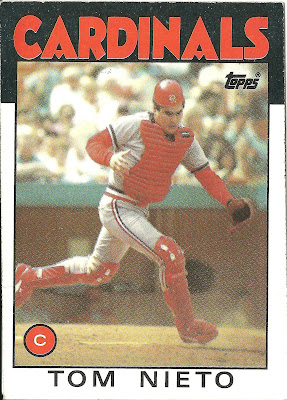 
Tom Nieto.  I pronounce it Neat-o, but this baseball card is anything but that.  It looks like he chasing a passed ball, his helmet is on crooked, not the best action shot.

When I see cards I always think about showing the card to your kid years later.

I'm all about putting a good spin on a card but this one is a hard one to explain.

"You see son, there was a big play at the plate and Pete Rose was rounding third, so I let the ball go by me, so he wouldn't Ray Fosse me."

"John Tudor was pitching and those lefties always throw it in the dirt and expect me to dig it out.  That was credited as a wild pitch, not a pass ball."


In 1986,  Topps had photos of all the Cardinal catchers in action.  Randy Hunt looks cool.  His hat flying off as he goes for a pop up behind the plate. 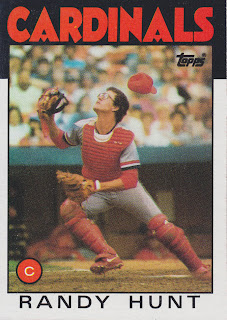 Mike Heath is on the field and looks like he's tracking down a bunt laid down by speedster, Tim Raines. 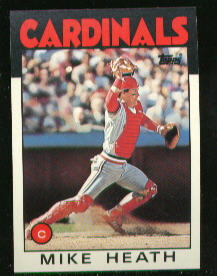 But poor Tom Nieto is chasing a passed ball.  Luckily that wasn't Mr. Nieto's only card.

Here he is as an Expos. 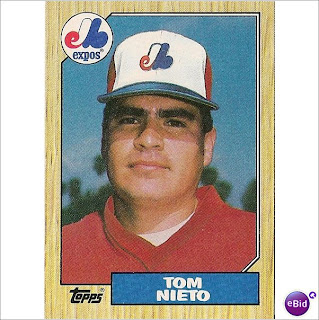 And his 87 is not the best card, but it's easier to explain than chasing a ball.

"Dad, what's with your eyebrows."

"Son, that was long before man-scaping.  I was a baseball player.  My appearance wasn't my main focus.  This was in '87, before the emasculation of men happened."