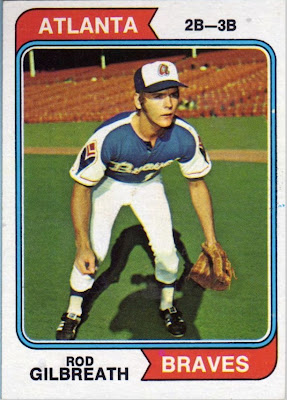 
My man Rod Gilbreath looks like he's ready to wrassel'.
or
He's a contestant on the Amazing Race it's starting in Atlanta and he's waiting for Phil to say "Go".
or
He's getting ready to tackle the photographer because the guy's shadow is in the picture.

I love stuff like that.    It's kind of cool because the photographer's shadow combined with Rod's shadow, looks like Grand Pa Simpson.  The Shadow also appeared in a card a year earlier with Joe Hoerner.  Both photos look like they were taken the same day. 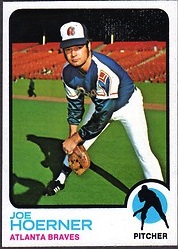 This photographer is in 2 different cards, how cool is that.  That's 2 more cards than I'm in.  If he shows it to his friends I'm sure he says "They told me they were going to crop the photos."

Okay back to Rod Gilbreath.
I don't really know that much about Mr. Gilbreath.  He debuted in the majors in 72 and played full time 75-78. 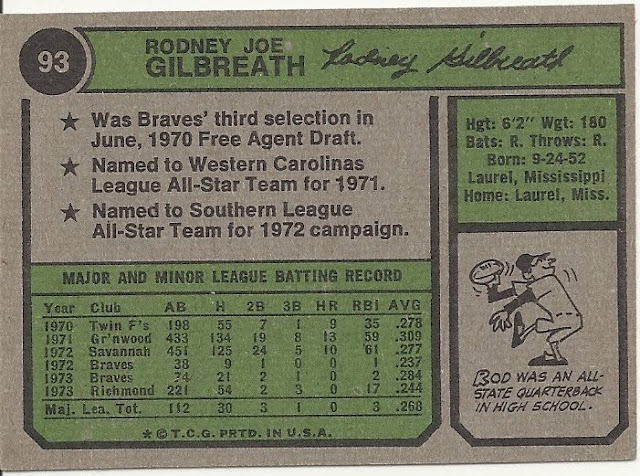 Checked out the back of the card.  He's from Laurel, Mississippi.  That's the same small town my dad is from.  Therefore, Rod Gilbreath must be a good man.

Have a good weekend.  Proclaim your rarity!
Posted by T. Sean Shannon at 10:08 AM