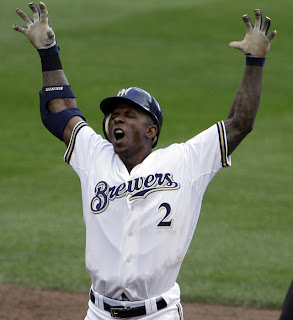 Baseball has also had it's A-holes.  Denny McClain, Jeff Kent or A.J. Pierzynsky who was once described by a diplomatic teammate as "an acquired taste".

Baseball has always had gritty players who play with their heart on their sleeve, like Pete Rose, Lenny Dykstra and Bryce Harper.

Baseball also has it's turds.

Last night Nyger Morgan shoved a Cincinnati fan after going into the stands after a foul ball.  The fan was trying to catch a fly ball and they got tangled up and Mr. Morgan shoved him with his glove and started mouthing off to the guy in the stands.

If this was the first jackass thing Nyger Morgan did, this would be a non-issue, but this guy is a repeat offender.

Nyger Morgan is a great athlete who throws balls into the stands, curses out fans, un-necessarily runs over catchers, and he even gave himself a nickname, T-Plush.

First, Uncle T. Sean doesn't like people who give themselves nicknames.  Second,  these aren't the mistakes of youngster, Mr. Morgan is 30 years old, these are the actions of an immature adult.  Lastly, if you're going behave like an ass, make sure you have the talent to back it up like Deion Sanders.

I didn't start this blog to be a hater...