Roger Clemens and a jury of his peers 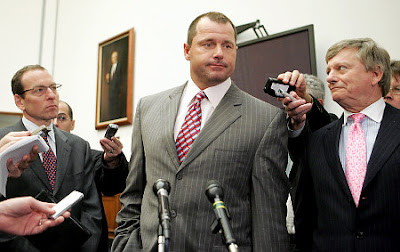 8 women and 4 men, who have never played major league baseball, are in deliberations to decide whether Roger Clemens is guilty of perjury.

Closing remarks were yesterday and prosecutor Gil Guerreor reminded the jury about the evil of baseball players.  "They influence children. They influence kids. Congress has to be involved with that,  Congress has the authority to protect the nation's youth."

I don't buy that.  But maybe Roger Clemens peers will.

Now I've only been married for 18 years, but based on my experience I find it easier to believe a wife doing something without her husbands knowledge more than a wife getting on the stand and lying for him.  If she was lying for one of her friends, I would believe it.  Her husband, I doubt it.

I also find it curious when they chose a woman co-prosecutor.  It worked so well in the O.J. trial.   And this is nothing against equal rights, but I find it hard to believe a woman can truly understand a male athlete's mind.  I grew up in comedy clubs and one thing I learned is men and women are different.  To put a woman against a man in this situation seems nothing more than an attempt to emasculate an athlete.  In fact, that's what this whole trial feels like to me.

Another gem from prosecutor's closing arguments was "we know that you do not want to find Roger Clemens guilty. Nobody wants to believe he did this."
I don't buy that either.  I don't think people have any "wants" on their opinions about Mr. Clemens drug use.
In my closing argument to America I will paraphrase Ms. Saleski.
We know that you do not want to find out how many Government resources were used trying to shame Roger Clemens.  Nobody wants to believe that so many hours and tax payer dollars were used to go after a guy who throws a baseball.  And lastly, we know that the people who bullied this inane investigation past the greater good of our Nation will never be held accountable for their crime.
God Bless Roger Clemens and the people of the United States of America.
T. Sean rest.
Posted by T. Sean Shannon at 1:57 PM