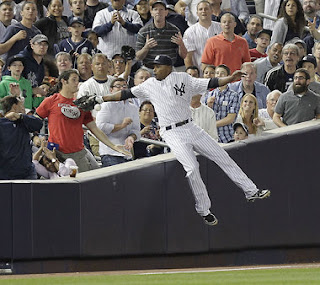 In last night's Yankees vs Indians game, an umpire missed a call.


In the never-ending need to feed the 24 hour news beast, people often make mountains out of molehills.  To quote Samuel L. Jackson from almost every movie he's been in "Everybody needs to chill the F out."
Some asswipe who writes for Yahoo MLB said


Umpires, like any other category of human being, make mistakes. But the error that umpire Mike DiMuro made in Yankee Stadium on Tuesday night defies any explanation.

Defies any explanation?  Well, pull up a chair,  and I'll explain it to you.


The umpire didn't ask to see the ball after the catch.

What you thought couldn't be done, I have accomplished in one sentence.

That's it.  Since you cover baseball, I imagine you know how the infield fly rule works and that's much more complicated than what happened last night.


I know,  why didn't he ask to see the ball?  That you answered in your first sentence.  Human beings make mistakes.  He wasn't on his game.  He screwed up.  That happens.  I was at a Cardinal game once and saw Ozzie Smith make an error.  I'm sure you think that defies any explanation, but it doesn't, Ozzie misplayed the ball.


ESPN Baseball Tonight showed the play and froze the video on the umpire looking in the stands and even drew a sight line so we could see the umpire looked at a fan holding the baseball over his head.  That's right, a fan was holding the ball that Dewayne Wise was suppose to have caught.

The anchors said the umpire sees the guy with the ball.  Why didn't the umpire correct his call then?   A fan was holding up the ball in the stands!

I'll help you guys out, again it's not that complicated.

The guy messed up and he should have asked Mr. Wise to see the ball, but that's all that happens.
Being an umpire is a thankless job.  There's been bad calls this year.  That happens every year.  Should there be instant replay?  Yes.  To what extent?  I have no idea, I'm a comedy writer.  Do I think baseball will figure it out?  Not correctly, but yes it looks to be moving in that direction.

This ump wasn't looking to prove a point, even a score, or feed his ego, it was just a bad call.  That's all. 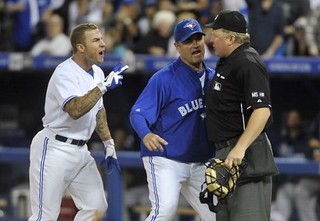 On the other hand, earlier this year umpire Bill Miller's ego was hurt when Brett Lawrie started towards first after what he thought was ball 4, so Mr. Miller called it a strike.  Next pitch was a ball as well and Bill Miller called it a strike and Mr. Lawrie threw his helmet and it bounced up and hit Mr. Miller.  I would like to say what Mr. Miller did defied any explanation, but it was just him being an asshole letting Mr. Lawrie know who was in charge of the game.  I think writing about an umpire who puts himself above the game is more newsworthy than an umpire who makes a mistake.