What???   The Yankees got burned last night and on a couple of calls the night before.

Okay, most people don't care when the Yankees get ripped off, it's like not feeling bad when you hear about someone robbing a Casino, but still something has to be done. 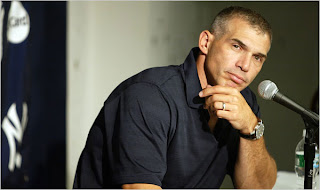 This is a big can of worms MLB is going to have to open, so that might as well give it a shot.

My biggest complaint this year is that there wasn't a day off between the AL divisions and championship playoff.  Come on, they deserve a break.

The playoffs are still fun, but baseball needs to step up and figure this out instead of fixing other things like sending the Astros to the American League.

Come on Bud Selig, get with the program.