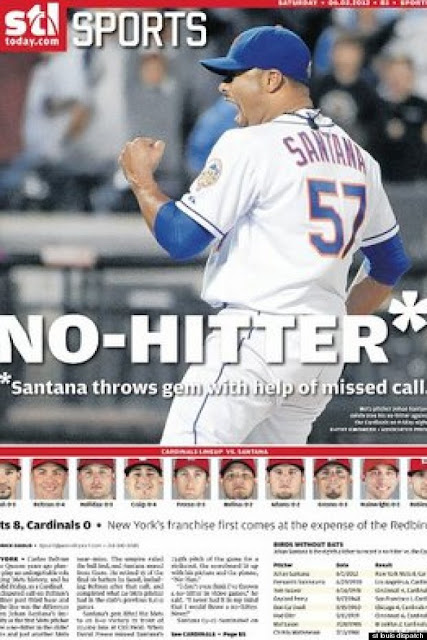 There was a call missed by the umpire in the 6th inning that took away a hit from Carlos Beltran.  That's the way it goes.   All the players took it in stride including Mr. Beltran.

But some paper in St. Louis ran the headline NO HITTER with an asterisk after it.

I did not read the article, but if it was a thumb of the nose to baseball nerds and purest who live and die by records, numbers and the dusty history of the game, than kudos to the intrepid St. Louis paper.

The time is now for those scoundrels to receive their comeuppance.  The people in baseball responsible for putting an asterisk next to Roger Maris record or keeping the greatest hitter of all time out of the Hall of Fame deserve a good lashing.

Speaking of all those baseball nerds and purest, I hope you questioned them about their silence about the Astros getting date-raped and forced into the American league?
I think it's brave if your article is attacking baseball sticks in the mud.

On the other hand, if the article is your way of saying it wasn't really a no-hitter, then go blow yourself.