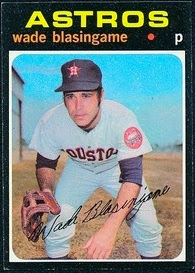 Not the Attorney at Law, the baseball player.

Loved this card as a kid.  He's got a great name, he's a southpaw, he's got sideburns, he's standing next to an airplane hanger and best of all he plays for the Astros.  Wade Blasingame was a pitcher for the Braves, Astros and Yankees.  Mr. Blasingame is mentioned in Jim Bouton's book Ball Four as the best dressed guy on the Astros in 1969. 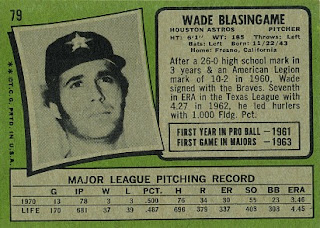 I love the 1971 cards because you got a bonus picture on the back.  Since they only showed you the previous year and life time stats it's one of the few cards that I can still read the back of without my cheaters.


When I was at SNL I always used baseball players names in sketches.  I wrote a commercial parody called Wade Blasingame where Will Ferrell plays an attorney.

The week after it aired Wade Blasingame called the show and invited me up to his place in Fresno to go fishing.  We hung out and he told me stories about his playing days.  Actually, I never heard from him, but it would have been cool to go fishing with Wade Blasingame, the ball player.

Have a good weekend.