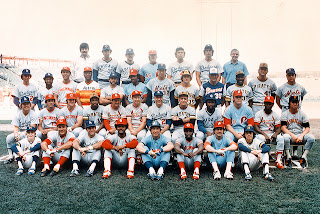 The All-Star game is upon us, but first a little home run derby.

That would be a home run derby worth watching.  I'd record that.  Instead I will watch the recap of the home run derby on Sportscenter or QuickPitch and it will still be too long.

The powers that be are going to drag out the home run derby and even installed some fake drama because they're competing as a team representing their league.  Since the Astros are getting date-raped and forced into the American League next year I didn't need any extra drama, but I guess America did.

If you plan on watching the home run derby, get ready to see more shots of players off to the side over reacting while holding an I-phone and filming it, then of actual home runs.  Boring.

Give me the ding of an aluminum bat swung by Prince Fielder any day of the week.   That's something fans never get to see.   Much different then trying to make batting practice a "must see" event.

PLEASE STOP DOING INTERVIEWS OVER THE P.A. DURING AN EVENT OR FOR POST GAME INTERVIEWS -

The only other time I've seen anything similar was in high school during a Donkey Basketball game.  It actually worked in the school gym.  But, you can't use the intimate medium of television and conduct an interview in front of an audience of 55,000. It doesn't work.  Please stop doing it.  I beseech you.

When you're on location, stop letting local yahoos stand behind your Sports desk screaming.  It's never worked.  Why let a bunch of drunks ruin your broadcast as well as my viewing experience at home?  Local yahoos cheering when they see themselves on the magic box has never helped, ever.

Go to the game, get drunk, stand behind a show doing a live broadcast, slip through the barricade, jump on stage and get an announcer in a headlock during the show.  You will be an overnight internet sensation.  You'll probably get on Conan or Jimmy Kimmel.  Plus, this might be the only thing that will stop ESPN and everyone else from letting bone-heads cheer in the background behind a Sports Desk. 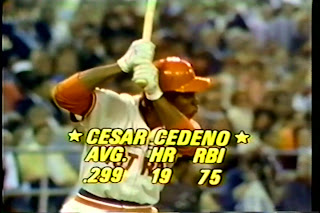 Go blow yourself.  Small market teams have enough of a struggle keeping up with the free spending clubs, now you want to shut them out of their one shot on the main stage.  I know I said it earlier, but seriously, go blow yourself.  When I was a kid, there was nothing cooler than seeing your teams uniform in the All Star line up.  In 1975, Bob Watson was the only representative of the Astros.  Don't even remember the game, but I remember Bob Watson getting introduced.  It was super cool.


That said, I look forward to tomorrow's game.  Always love watching the All-Star game.  Justin Verlander is starting for the American League.  Matt Cain for the National League.  I love the fastball.  And the Astros Jose Altuve will be there.  So will Chipper Jones and Bryce Harper.  Imagine that.

Tomorrow: An All Star edition of Baseball Card Theater. 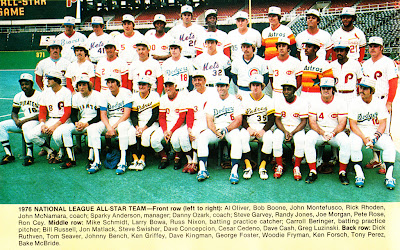