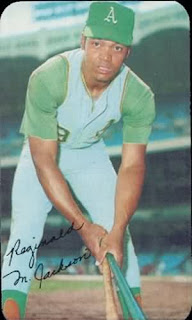 Today I feature a 1970 Topps Super card of my main man Reggie Jackson.   These were over-sized thick cardboard cards.  I love these cards as a kid because they featured different pictures than the regular sized cards.  I also love me some Reggie Jackson.

Growing up in a National League city I only saw him play in All-Star and Playoff games and Reggie Jackson never failed to impress.  In a recent Sports Illustrated article Reggie named players he thought didn't belong in the Baseball Hall of Fame.

First, I love he brought up my man Jack Morris.  Jack Morris deserves to be in the Hall of Famer.
I'm pretty sure that's what Mr. Jackson was saying.  Right?  That's what I heard.

Look, I think the players he named should be in the Hall of Fame but I think I understand what he means... He's Reggie Jackson.

He's one of the greatest players ever to play the game.  He can't understand why those guys deserve to be in the Hall of Fame because he's judging them against himself.  He's REGGIE JACKSON.  Mr. October.  He was really, really good.  In big games he was a money ball player.   He won the World Series MVP twice.  He has 5 World Series championships.  During an All-Star game he hit a home run out of Tiger Stadium.

All I'm saying is he Reggie Jackson.  Give him room.   Now back to his Super Card...

The other great thing about Topps Super Cards is I think this is the first time I truly appreciated the back of the card.  Also check out the cartoon.  Reggie had ten RBI's in one game.  That's hard. 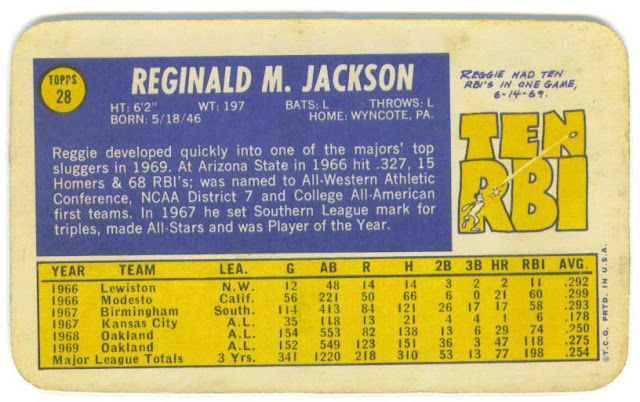 Have a great weekend.   The Astros are in Arizona this weekend.  I predict a sweep...  actually I think the Astros might actually win one.
Posted by T. Sean Shannon at 9:01 AM