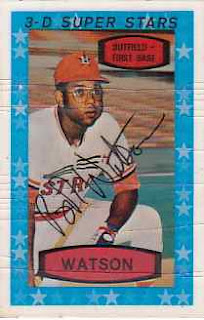 Kids love 3-D.  I don't know that to be true, but Hollywood believes it so I believe.

I never got to eat sugar cereal when I was a kid because my parents figured out that crap was bad for you before Sugar Bear changed his name to Super Bear.  So if they didn't come in Corn Flakes I didn't get many 3-d cards when I was young, but I always got a few and this was one of my favorites.

It's Bob Watson.  The Bull.  He started out as a catcher, got moved to the outfield, then when the Astros got rid of Lee May, he got moved to first.  My favorite part of the card is that it was taken inside the Astrodome.  Other than Astros team photos I don't know many cards inside the dome.  I also love he's got a chew in and is rocking glasses. 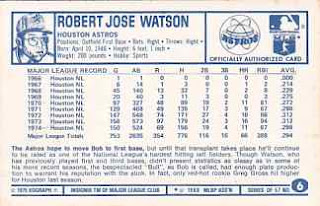 Bob Watson hit for the cycle in both the American and National League.

In 1974 Bob Watson ran into the wall at Wrigley and while he laid unconscious bleacher bums poured beer on him.   I heard it might have happened in Cincinnati not Chicago.  I'll ask Bob next time I see him.

Bob Watson was the hitting coach for the Oakland A's in 1988 when they won the World Series.


Now Mr. Watson is the Vice President of On-Field Rules and Discipline and Paperwork for Major League Baseball.