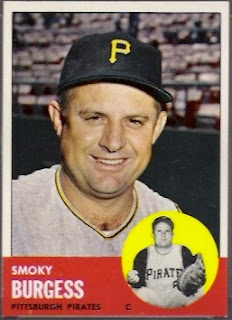 1963 is one of my favorite years because you get a bonus photo at the bottom and today's card features a great player with a great name.

Smoky Burgess was one of the greatest pinch-hitters in baseball.  He held numerous pinch-hitter records many of which were broken by the great Manny Mota.   They say Smokey could sleep for eight innings, wake up, hit a frozen rope to right and be back alseep on the bench before it landed in the outfield.

I've got a bunch of Smoky Burgess cards because he has a great name and in most cards he has a giant chaw in it. 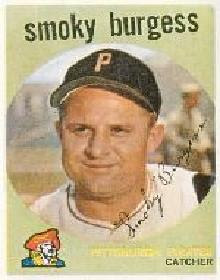 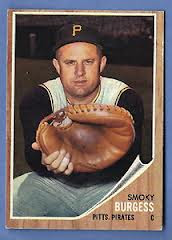 Smoky played for 18 seasons making 9 All-star teams and winning a ring with the pirates in 1960.  Today is the last day of August but I declare today is...

Have a great weekend.
Posted by T. Sean Shannon at 2:22 PM