Roger Clemens is back on the mound

RETURN OF THE ROCKET

The Rocket is back!!!  Roger Clemens is schedule to pitch this weekend outside of Houston for the Sugarland Skeeters. The Skeeters are part of an independent league and managed by former major league third baseman, Gary Giaetti.

First, before any speculation of Roger Clemens pitching for the Astros in September lets just think for a second and appreciate how cool this is.

Clemens is 50 and he's playing in an 8 team independent league.  They're playing the Bridgeport Bluefish and those guys get to face one of the best in the history of the game.  That's super cool.
My brother just moved to Sugarland and might go to the game.  Again, super cool.

These independent league are full of former players trying to make comebacks or hone their coaching skills.  My buddy is part owner of the Orange County Flyers and the first year their manager was Hall of Famer Gary Carter and the next year former Astro Phil Nevin managed the Flyers.

Phil Nevin's the guy the Astros drafted instead of Derek Jeter.  Really?  There were Astros scouts telling them to take Derek Jeter but once again my beloved Astros screwed the pooch.  Man, the Astros have never had a good shortstop.  Not only is Derek Jeter one of the best players ever, he was also a great host on SNL.

Anyway, back to Roger Clemens, my point is the independent league is the real deal and has quality players trying to get to the major leagues.  Rickey Henderson and Jose Canseco played in this league during comebacks.   So Mr. Clemens is not just going to skate by.  Now let's start speculating...

WHAT IF ROGER CLEMENS RETURNS TO THE ASTROS?

Mr. Clemens could make some money and put his vote for the Hall of Fame off for another five years.  Sadly, even though he was proven innocent in a court of law, a handful of people still think Roger Clemens took steroids.

Five years from now people's attitude could change towards players who took PEDs.  Plus if he wins a game at the age of 50 that puts him up there with Satchel Paige as old guys who still can get the job done.

The bad thing about a comeback is the Astros suck.  So Mr. Clemens probably wouldn't get a win and he could end up looking worse than Brett Farve did on his last comeback attempt.  You know his critics are sharpening their knives praying for that to happen.

I think it would be amazing to watch Roger Clemens pitch in the majors and it would give people a reason to watch the Astros in September.   Plus the 'stros could benefit from some news that doesn't deal with the fact that they have become the Washington Generals of baseball. 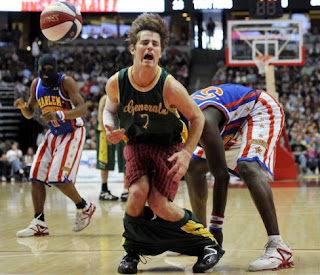