The Brad Mills Era Has Ended

Brad Mills has left the Stadium

So it turns out the Astros did have a manager during this embarrassing season.  It was Brad Mills, but now he's done.  They 86'd Brad Mills Saturday but he won't be walking away empty handed, tell him what he's won...

The Only Houston Manager to manage a team that lost over 100 games.

Now does he get credit for this years 100 lost season?  Is it like a pitcher once he leaves the game does he get the lost.   It seems like he should, which would make his record of back to back seasons of 100 loses hard to beat.

Was Brad Mills the Problem?

I would say no, but he wasn't the solution.  Never got a read on him for the 2 1/2 season's he coached the Astros.  Hard to tell what a manager does and I had no idea what Brad Mills was doing and I never got a read on his managing style. The Astros also canned the first base coach and the hitting instructor. 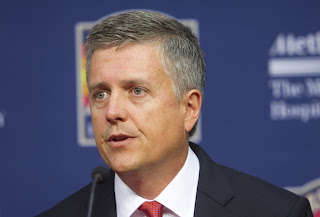 Astros General Manager Jeff Luhnow replaced the coaching staff with all his old cronies from St. Louis.  I remember we had a G.M. once that mainly made deals with his old team, the Phillies.  I think his name was Ed Wade.  I don't remember that working out.  Oh yeah, we had another guy who did it before him, Gerry Hunsicker who seemed to only make deals with the Mets.  Don't remember that working either.  Hopefully it will work this time.  Right?