IN THIS CORNER
Manager of the Red Sox and confirmed squirrel,  Bobby Valentine...

AND IN THE OTHER CORNER 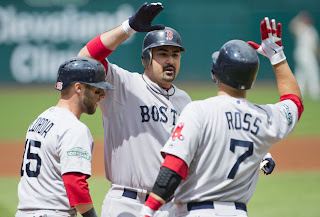 Over half the Red Sox players...

Turns out last time the Red Sox were in New York, 2/3 of the players had a secret meeting with the owner about Mr. Valentine among other things.  Now that the secret meeting has become public knowledge and things are awkward in Bean Town.

Who am I betting on?

I'd like to give Bobby Valentine a puncher's chance but the Red Sox would have to win the world series and I don't think that's gonna happen.  They have a lot of money invested in Pedoria and Gonzales so I don't think Mr. Valentine has any leverage.  He might last the entire season, but once we go to the judge's card, he's done.

This isn't even a good bout, which brings us to the real problem, who set this fight up?

Oh I remember.  It was the owners who hired Bobby Valentine in the first place.

I'm going to need you to show your work because I never understood the logic behind this.  Don't get me wrong, I think it was wonderful that Mr. Valentine left Sunday Night Baseball because I found him annoying, but it seemed like a bone-head idea to have him manage Boston.

I could see a hard ass like Larry Bowa but Mr. Valentine just seems like a guy who likes to be the focus of things and I don't think the Red Sox needed that type of manager.  Again, I'm a comedy writer but even I knew this wasn't a good move.  But hey, it's not my team or my millions and millions of dollars being spent.