That's the best game you have for us?  The Brewers were out of it a month ago, can't you re-arrange games?  The Pirates and the Reds are battling it out for first place you can't move that game.
White Sox vs Angels is not a game I'm dying to see, but still more relevant than Cards - Brewers.
You need Sunday Night Football power and get to call the game you want.

As for the announcers, this is the first crew I've enjoyed since Joe Morgan and Jon Miller called the games alone.  Terry Francona brings the knowledge of a lifer and is comfortable being himself.  I've always liked Orel Hershiser as an announcer, and they bald guy is good.  I didn't realize how good until a week ago when some other stiff shirt with hair sat in for him.  Dude, I'm gonna learn the bald guys name because he's good at keeping things moving and getting business out of the way.

I still don't understand all the hate thrown towards Joe Morgan.  I thought he and Jon Miller were great together.  Always liked Joe because he was an Astro and I dug him as an announcer.  I've read quotes of things he said on hater websites but none of them offended me or annoyed me. 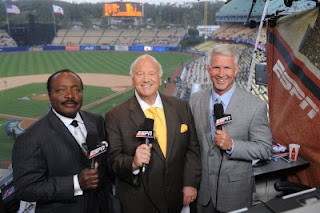 Before they gave Jon and Joe the eighty-six, they added Steve somebody.  Don't have any quotes he said just didn't like him and didn't think he added anything.   Then they added Orel, who I thought brought the pitcher's perspective.  Then Mr. Morgan and Mr. Miller were shown the door. 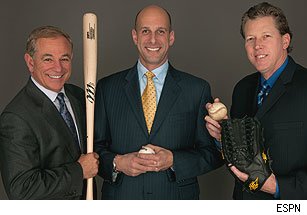 Then the bald guy, I want to say his name is Jim or John,  I think it begins with a J, anyway, that guy and Bobby Valentine joined Orel in the booth.  Usually I like former managers.  Lou Pinniella is amazing to listen to.  Buck Showalter would steal signs from the booth, "yep, they're throwing a pitch out".  Bobby Valentine, I just thought, this guy is annoying.  Again, I don't have any quotes because I wasn't looking to convict him of anything, just didn't like the guy.  Don't like Mr. Valentine as a manager much either.

I looked it up, the bald guy is Dan Shulman.  I also found out he's Canadian.   Hmm.