He was born in Lakeland, Florida.  They say he weighed 22 pounds.  He grew up to be the first baseman for the Baltimore Orioles...  I'm talking about Boog Powell.

In 1969, Boog Powell was runner up to Harmon Killebrew in MVP honors, but then in 1970 he won the American League Most Valuable Player.  He also won his second World Series ring that year. 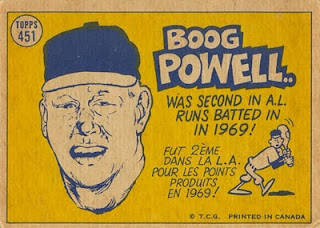 Here's the back of the card that was released in Canada so the fun fact is also presented in French.


Boog Powell is possibly my favorite baseball player of all time.  He's got one of the greatest names ever and when I was a kid he came to Finger's Furniture in Houston and signed autographs and I remember him being cool when I met him.

When Boog left baseball he was the first player to open a Bar-b-que restaurant inside a ballpark.  If you go see a game at Camden Yards, stop by get a pulled pork sandwich and get your picture taken with Boog Powell.