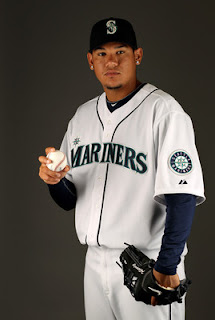 Baseball has a Roller-Coaster Wednesday

Felix Hernandez threw a perfect game for the Seattle Mariners yesterday.  I knew they weren't playing the Houston Astros, so my first thought if it was a Mariners pitcher, it was probably an inter-squad game.  But no, King Felix shut down Evan Longoria and the Tampa Bay Rays.
It was only the 22nd perfect game in Baseball history.

Melky Cabrera tested positive for elevated levels of testosterone and given a 50 game suspension.  My first thought was that he was hanging out with Rod Stewart, David Bowie or whoever else was linked to getting his stomach pumped, but it turns out he was using performance enhancing drugs.

Melky was having a great year and was the most valuable player in this year's All-Star game in Kansas City.  Man, those PED's really work.  No wonder people take them. 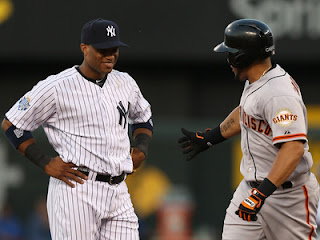 Melky Cabrera cheated and helped win the All-Star game which determines home field advantage.  That's got to tick off people in the American League.  I wouldn't shake that dude's hand either.

Which brings us back to why does the All-Star game count?   What jack-ass made that decision?

Anyway, Mr. Cabrera is gone for the rest of the season with the Giants in a pennant race.  San Francisco still has good pitching but this suspension could derail their chance at the playoffs.

Baseball can be perfect and flawed in the same day.  I love me some baseball.
Have a great Thursday.